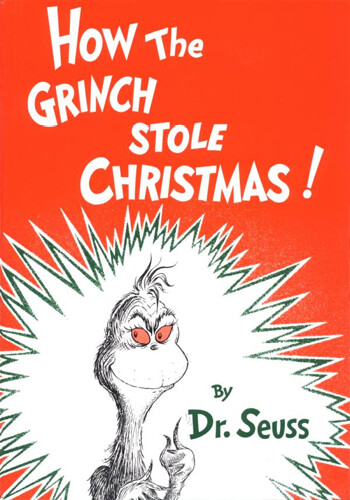 The original Grinch was not green.
The illustrations are all in red, white and black.
It is time for another narrative poem! And what says Christmas more than a Grinch? (AmIright, Karoline?) Certainly it seems like an excellent antidote to the "toys are all you need" moral of the L. Frank Baum's book earlier this week.

It was written in 1957 by Dr Seuss. If, like Tor, your first reaction to that name is to wonder what he was a Dr in, I can inform you that he was not. He did start out on the road to a PhD in English Literature, but he got sidetracked and ended up one of the most successful children's literature writers in the world. As you do. He did get an honorary doctorate from Dartmouth, though, eventually.

The book was wildly successful, but the Grinch has possibly been made more famous through the cartoon adaptation from 1966 (where the Grinch IS green; and it is all read by Boris Karloff). If you haven't already, you can watch it here. For now, though, let's have a look at the actual poem. Here is how it begins:

Every Who
Down in Who-ville
Liked Christmas a lot...

But the Grinch,
Who lived just north of Who-ville,
Did NOT!

The Grinch hated Christmas! The whole Christmas season!
Now, please don't ask why. No one quite knows the reason.
It could be his head wasn't screwed on just right.
It could be, perhaps, that his shoes were too tight.
But I think that the most likely reason of all
May have been that his heart was two sizes too small.

Revel in the anapaestic metre!

But,
Whatever the reason,
His heart or his shoes,
He stood there on Christmas Eve, hating the Whos,
Staring down from his cave with a sour, Grinchy frown
At the warm lighted windows below in their town.
For he knew every Who down in Who-ville beneath
Was busy now, hanging a mistletoe wreath.

"And they're hanging their stockings!" he snarled with a sneer.
"Tomorrow is Christmas! It's practically here!"
Then he growled, with his Grinch fingers nervously drumming,
"I MUST find some way to stop Christmas from coming!"

The Grinch absolutely hates, loathes, cannot abide the NOISE of Christmas, which follows the unwrapping of the toys. It would be fair to say he and Baum's Santa Claus have conflicting philosophies. He is not a great fan of the feasting, either (more specifically the Whos' Roast-beast and pudding). (If you are getting flashbacks to Dickens' A Christmas Carol, that would not be terribly surprising; though Dr Seuss gets his misanthrope out of his funk without the aid of a single ghost -- possibly because the Grinch is rather more... proactive. Probably because the provocation just gets to be too much:

And THEN
They'd do something
He liked least of all!
Every Who down in Who-ville, the tall and the small,
Would stand close together with Christmas bells ringing.
They'd stand hand-in-hand. And the Whos whould start singing!

(This is the point at which I rather sympathise with the Grinch. I think we could all do with a little less impromptu bad choir impersonations around Christmas time.) Rather than simply sit there and look uncomfortable (which is my way), however, he forms a plan.

Then he got and idea!
And awful idea!
THE GRINCH
GOT A WONDERFUL, AWFUL IDEA!

He dresses up like Santa Claus, ties a horn to his dog's head, and attaches him to a sleigh. And off they go to Whoville, where the Whos sleep peacefully. And in classic Santa Claus fashion, he sneaks down the chimney. Once in, however, he steals everything. He takes the stockings to start with.

Then he slithered and slunk with a smile most unpleasant,
Around the whole room, and he took every present!

Quite shocking, you must admit. He gathers everything in his bags and stuffs them back up the chimney.

And that, too goes up the chimney. But just as he is about to do the same to the only thing that remains (the Christmas tree), he is caught in the act by little Cindy-Lou Who, who asks some rather pertinent questions regarding the why and the wherefore of Santa and the apparent purloining of the tree.

But you know, that old Grinch was so smart and so slick
He thought up a lie, and he thought it up quick!
"Why, my sweet little tot," the fake Santa Claus lied,
"There's a light on this tree that won't light on one side.
"So I'm taking it home to my workshop, my dear.
"I'll fix it up there. Then I'll bring it back here."

And Cindy-Lou, being no more than two, accepts that as a likely tale, not knowing that if Santa actually fixed light bulbs gone wrong on Christmas trees, he would have no time left over for handing out presents. She goes back to bed, and the Grinch leaves, taking the log for the fire for good measure, before similarly cleaning out the other houses in Who-ville.

And as he is pushing the full sled three thousand feet up Mt Crumpit, he is happily anticipating the reaction of the Whos when they realise no Christmas is coming. And just as he is about to push the loot over the cliff at the top, he hears the first noises and stops in order to be able to savour it properly.

But the sound wasn't sad!
Why, this sound sounded merry!
It couldn't be so!
But it WAS merry! VERY!

It turns out nothing can keep the dastardly Whos from singing. The Grinch is baffled.

This is of course all very heartwarming. Especially as the Grinch's heart grows three sizes (thought that does sound medically inadvisable). I do appreciate the "can't buy me Christmas" moral; though I cannot help notice that having demonstrated that Christmas is not about presents and food, after all, the Grinch still brings all of that back to Who-ville, presumably because they would add to the cheer:

He whizzed with his load through the bright morning light
And he brought back the toys! And the food for the feast!
And he...
... HE HIMSELF...
The Grinch carved the roast beast!

I am fairly sure that tone of betrayal in the last line is all in my head. A much more appropriate tone would probably be that of breathless, "I-cannot-believe-this" awe.

This is not just a poem, of course, (if there is such a thing); it is a book -- and a book in which words and illustrations go hand in hand, and the way in which the turning of a page creates pauses for dramatic effect or surprise in a way not unlike what I noted in Dylan Thomas' book yesterday. Dr. Seuss illustrated it himself (unsurprisingly, as he originally left Oxford and his PhD in order to pursue a career in drawing).

The only question that remains is that of the title: How did the Grinch steal Christmas? Does it refer to his housebreaking, or did he steal Christmas as one steals the show? I'll leave you to have a sleepless night over that.
Tor, Karoline, Anja likes this

For det andre: "I think we could all do with a little less impromptu bad choir impersonations around Christmas time." altså. Denne må du forklare.