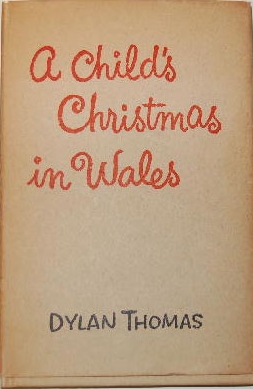 Dylan Thomas, to most people, is the man telling us to "rage, rage against the dying of the light" and to not under any circumstances go quietly into the night. All sound advice, in general (especially, I would say, after the Lovecraft entry two days ago). You may also know of his strong dipsomaniac streak, or that he was Welsh. But you may not be aware that he is also the author of a sweet little prose poem about Christmas.

You can listen to the 1952 recording (made the year before he died) here, or you can read it here (though I do not recommend it because I suspect that horrible custardy yellow background can put anyone off literature). It is well worth listening to Dylan Thomas read, though. I don't care what he reads; pretty much anything will sound like poetry; and when he reads poetry it all gets rather spectacular.

I called "A Child's Christmas in Wales" a prose poem because it has that rhythmic aspect which makes it somehow other than a short story; and where you would expect a short story to have a clearer structure, this collection of memories is much looser and more associative. There are people who insist on presenting it as a cloyingly nostalgic piece about the innocence of childhood (seeing this, apparently, as a good thing). I am not sure I agree. It contains enough funny twists and turns to undermine the nostalgia. If anything, the children are the one who keep poking it with a stick.

Though it does contain a beautiful opening image on memory:

All the Christmases roll down toward the
two-tongued sea, like a cold and headlong moon
bundling down the sky that was our street;
and they stop at the rim of the ice-edged,
fish-freezing waves, and I plunge my hands in the
snow and bring out whatever I can find. In goes
my hand into that wool-white bell-tongued ball of
holidays resting at the rim of the carol-singing
sea, and out come Mrs Prothero and the firemen.

I said it was a prose poem. Prose poems do not generally have line divisions in the way I have provided them here, and if you look at other editions of the piece, they may not be there. But the edition I consulted had rather short lines, and I was struck by how wonderfully they worked. So I am reproducing them here. Typography as a conveyor of meaning for the win. And all that. Allow me to demonstrate.

It was snowing. It was always snowing at Christmas.
December, in my memory, is white as Lapland,
though there were no reindeers.
But there were cats. Patient, cold and callous,
our hands wrapped in socks, we waited
to snowball the cats.

Until the line turns, "patient, cold and callous" might seem to describe cats, for example. Or there is the way the nostalgia builds and builds, with the snow and the cold and the hands wrapped in socks; and it is only thanks to the line division that "to snowball the cats" comes as a surprise. And it does (to me at least), bringing the mischief into what was fast becoming rather saccharine. In case you are worried about the cats, though,

This is, after all, the memory of Mrs Prothero and the firemen. They are called away from stalking cats by Mrs Prothero screaming about fire.

And we ran down the garden, with the snowballs
in our arms, toward the house; and the smoke,
indeed, was pouring out of the dining-room,
and the gong was bombilating, and Mrs Prothero
was announcing ruin like a town crier in Pompeii.
This was better than all the cats in Wales
standing on the wall in a row.

I love the fact that cats lining up for snowballing is the standard against which all good things are measured. And that a fire, or possibly Mrs Prothero's din, is the thing to top it. However,

There was no fire to be seen, only clouds of smoke
and Mr Prothero standing in the middle of them,
waving his slipper as though he were conducting.
"Do something," he said.
And we threw all our snowballs into the smoke --
I think we missed Mr Prothero -- and ran out
of the house to the telephone box.

Which is how the firemen arrive on the scene, providing the perfect culmination to the memory image:

And when the firemen turned off the hose and
were standing in the wet, smoky room, Jim's aunt,
Miss Prothero, came downstairs and peered in
at them. Jim and I waited, very quietly, to hear what
she would say to them. She said the right thing,
always. She looked at the three tall firemen in their
shining helmets, standing among the smoke and
cinders and dissolving snowballs, and she said:
"Would you like anything to read?"

Which IS absolutely the right thing to say. And I fully intend to start saying it in that sort of situation, just as soon as I can get someone to wreak havoc around me. This is not the end, however. The piece changes, and just as it promises to become enraptured with its own nostalgia, it is interrupted.

Years and years and years ago, when I was a boy,
when there were wolves in Wales, and birds
the colour of red-flannel petticoats whisked past
the harp-shaped hills, when we sang and wallowed
all night and day in caves that smelt like Sunday
afternoons in damp front farmhouse parlours,
and we chased with the jawbones of deacons,
the English and the bears, before the motor-car,
before the wheel, before the duchess-faced horse,
when we rode the daft and happy hills bareback,
it snowed and it snowed. But here a small boy says:
"It snowed last year, too. I made a snowman and
my brother knocked it down and I knocked my
brother down and then we had tea."

This is not actual memory, but a kind of nostalgic, romanticised version of the past, which is punctured when the piece becomes a conversation. A discussion of snow and postmen and bells follows, until they get to presents and then (as a finale) the useless presents. This is one of several lists in this piece. I recommend you read to the end of this one.

"Bags of moist and many-coloured jelly babies
and a folded flag and a false nose and a tram-
conductor's cap and a machine that punched tickets
and rang a bell; never a catapult; once, by mistake
that no one could explain, a little hatchet;
and a celluloid duck that made, when you pressed it,
a most unducklike sound, a mewing moo that an
ambitious cat might make who wished to be a cow.

Which is where I started giggling and people at the NLS looked at me. Reading room patrons are generally not as tolerant of giggling as they could be, which weirdly only fuels it once it gets started. But I do not want to give the wrong impression. Wonderful as the lists are, there is more to the piece. In-between reminiscences of Christmas celebration, where

Mothers, aunts and sisters scuttled
to and fro, bearing tureens. Auntie Bessie, who
had already been frightened, twice, by a
clock-work mouse, whimpered at the sideboard
and had some elderberry wine.

(Note the line divisions again!), you get conversations founded in children's logic:

"Let's post Mr Daniel a snowball through
his letterbox."

Before the memory ends safely in bed, however, as the night grows dark and "ghosts whooed like owls in the long nights", they go carolling at the door of a scary house, all terrified, but not admitting it.

"What shall we give them? Hark the Herald?"
"No," Jack said, "Good King Wenceslas.
I'll count three."
One, two, three, and we began to sing,
our voices high and seemingly distant in the
snow-felted darkness round the house that
was occupied by nobody we knew. We stood
close together, near the dark door.
Good King Wenceslas looked out
On the Feast of Stephen.
And then a small, dry voice, like the voice
of someone who has not spoken for a long time,
joined our singing: a small, dry, eggshell voice
from the other side of the door: a small, dry, voice
through the keyhole. And when we stopped running
we were outside our house.

And I cannot quite decide whether that is a funny or a sad story; because I can imagine the terror of the children, which is hilarious (because it is so familiar) -- but there is also the idea of a person on the other side of that door, hearing the singing and wanting to join in, only to have it cut short and disappear as they are left behind alone.

I recommend you get a hold of the book (or listen to Thomas' reading) and make up your own mind.
Tor, Karoline, Anja likes this