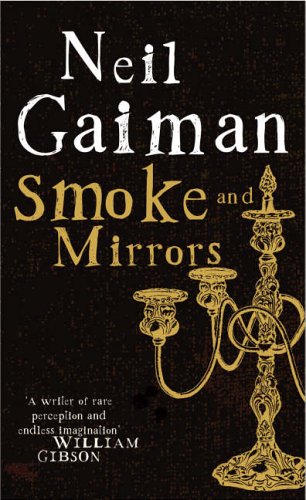 "Nicholas Was..." began life as a Christmas card,
but can be found in Smoke and Mirrors.
Neil Gaiman has a history of writing variations on well known stories, and doing it well. There was the incomparable "A Study in Emerald", which unites Sherlock Holmes and Lovecraftian horror at last (granted, so did the other stories in the collection Shadows over Baker Street, though none as wonderfully). Likewise, there was "Snow Glass Apples", which sees the story of Snow White through rather darker glasses than Disney ever managed. Perhaps to add balance, there is also a surprisingly upbeat take on the Cthulhu mythos.

It should, at any rate, therefore not come as any sort of great shock that the man has a take on the Santa Claus story which departs a little from the beaten track. In short, I hereby present the antithesis to L. Frank Baum's book-length story of happy nymphs and the glory of toys. In every way. Where Baum's book has two hundred pages, Gaiman makes do with one (in fact the story, including the title, is exactly 100 words long); where Baum's Santa is a happy creature bent on improving the lives of children everywhere, Gaiman's is ... not.

older than sin, and his beard could grow no whiter. He wanted to die.

Not the classic opening to a Christmas story, really. While the idea of an immortal being envying the mortal is not altogether new, it is rarely paired with cheerful fat men associated with gift-giving and children's happiness. Rather than a life of industry culminating in a cheerful finale on Christmas Eve, Nicholas is trapped in an everlasting, incomprehensible routine.

The dwarfish natives of the Arctic caverns did not speak his language, but conversed in their own, twittering tongue, conducted incomprehensible rituals, when they were not actually working in the factories.

Culminating in the horror that is Christmas Eve, on which he must visit every single child.

Once every year they forced him, sobbing and protesting, into Endless Night. During the journey he would stand near every child in the world, leave one of the dwarves' invisible gifts by its bedside. The children slept, frozen into time.

I am a little unsettled by the reference to "invisible gifts". Who are these dwarves, and what would they force him to leave behind? This section, however, is the logical conclusion to the idea that Santa moves fast enough to visit every house with a child: time must have slowed down for him, and as a result the evening (cold, dark) lasts an eternity. (How long would it take to visit every household at normal speed?) And when it is finally over, the process is repeated the following year.

He envied Prometheus and Loki, Sisyphus and Judas. His punishment was harsher.

Prometheus, the Titan who gave fire to mankind, was chained to a rock while an eagle ate his liver every day (it would regrow at night because he was immortal); Loki, the trickster god of Norse mythology, was punished for the death of Baldr by being chained (with the entrails of one of his sons) to the rocks while a snake placed above him dripped venom down on him (though his wife tries to protect him with a bowl, which she must occasionally leave him to empty); Sisyphus was also a trickster, who after fooling gods and mortals alike (and escaping at least once from death), was punished by having to roll a boulder up a mountian (a boulder magicked into always rolling away and down again before he reached the top); and Judas is, at least according to Dante, suffering eternal torment by being chewed on by Satan.

The question quickly becomes, What did Santa Claus do? But it is never answered. There is an element to trickster-traits in all the ones listed, though; and also an element of betrayal. The beauty of literature is that you are expected to make of it what you will. This story ends with a

Here is a beautiful animated adaptation: