Christmas stories: The Night Before Christmas 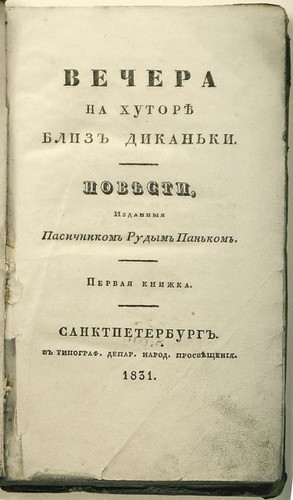 First volume of Вечера на хуторе близ Диканьки;
our story is in the 2nd, published the following year.
There is a tendency to think of Russian and Eastern European writers as ... well, a little depressing. This is not altogether true. Granted, Dostoevsky can take a grim turn (though nothing is as depressing as his happy endings, trust me), and Tolstoy's Anna Karenina does end in death and despair. But Russia is also the country of Bulgakov. And Nikolai Gogol, who precedes either, has a bit of both. He is also one of the great short story writers (thus putting paid to the idea of Russian literature as solely consisting of endless novels, in case you were labouring under that delusion).

Gogol was Ukrainian, though he wrote in Russian, and so I assume both sides in the current conflict lay claim to him). He moved to St. Petersburg at the age of 19, and only a few years later started publishing stories "from Dikanka" (a Cossack village in Ukraine). "The Night Before Christmas" (sometimes called "Christmas Eve") was one of them (originally published in 1832).

It opens quite conventionally. Or at least without any major surprises.

The day of Christmas Eve ended, and the night began, cold and clear.

Then, suddenly, a witch flies out of a chimney, collects a sleeve full of stars, and is soon joined by a devil

who had one night left to roam among Christian folk and teach them devilish tricks. Tomorrow at the first peal of church bells, he'd curl up his tail and scurry back to his lair.
The devil flew up to the moon, reached out and tried to grab it, but must have burned his fingers, for he hopped on one leg, sucking his hand. ... But the sly one didn't give up: he suddenly grabbed the moon with both hands and, juggling it like a hot pancake, stuffed it in his pocket, and flew off as though nothing had happened.

He does this to ruin the plans of Vakula, who must be called the tale's protagonist. A blacksmith with a bit of a talent for drawing, he has drawn the ire of the devil by painting a panel for the church in which St. Peter kicks the devil out of Hell on the Day of Judgement. In revenge, he is intent on keeping Vakula from wooing the lovely Oksana, which is best done by keeping her father from leaving the house in order to go to a party (hence the theft of the moon). This does not work out quite as he has planned, and many convoluted, farcical events follow.

Oksana, meanwhile, may be lovely, but she is not very nice; and while Vakula loves her to distraction, he does not like her very much. He walks in on her admiring herself in a mirror, giving a monologue on what she sees.

"Incredible," Vakula said to himself, entering the house quietly. "For a whole hour she's been staring at herself and still hasn't had enough."
"Is there anyone worthy of my beauty among those clowns?" Oksana continued.

Vakula is undeterred by her disdain for him (in a way which borders on creepily stalkerish), and after a little back and forth, Oksana declares that she will only marry him if he brings her the Tsarina's shoes, knowing that to be impossible.

Now, while Vakula is as godfearing as they come, Vakula's mother is the witch just seen with the devil. She also has a busy lovelife, with frequent visits from most men of note in the village. Because of the devil's shenanigans, they all end up in her house, one after the other, as the evening progresses. The devil arrives first, and is quickly told to hide in a coal sack when the first man knocks; the first man is then asked to do the same when the second knocks, etc. You get the idea. The final arrival is Vakula, who decides to finally clear out the coal sacks.

On his way he meets Oksana again, and after a repetition of the jibe about the Tsarina's shoes, he decides to go end it all in the river. On the way, however, reasoning quite soundly that if he is going to give up his immortal soul anyway, he might as well get something for it, he decides to get a devil to help him get Oksana (which is not creepy at all). The devil, who is still being carried around in a coal sack on Vakula's back, is all too happy to get a hold of the soul of the most Christian man in Dikanka, and volunteers his services.

Vakula, however outsmarts him by doing the sign of the cross, which apparently makes devils very helpful. So off they fly to St. Petersburg to find the Tsarina and her slippers. And it turns out the Tsarina is none other than Catherine the Great, or at least so I surmise based on the sudden appearance of Prince Potemkin when they arrive at the royal palace; there is also an appearance of what I think must be Denis Fonvizin.

"Indeed, I find his simple manner appealing. Here's a worthy subject for your pen," she addressed a pale, modestly dressed man.
"Your Majesty is too kind." The man bowed. "This subject requires at least La Fontaine."
"No, no, I am still quite taken with your Brigadier.

On the whole, this novella relies quite strongly on farce (even slapstick) and stock characters, in a way which suggests the fairytale; and the sudden introduction of historical characters has an odd, jarring effect. It threatens to bring the story of the devil and the village in Dikanka into historical reality. Or possibly Catherine the Great into that of fairytales.

At any rate, the Tsarina gives Vakenka her shoes, and he promptly flies back to Dikanka, where rumour of his suicide has been greatly exaggerated. His disappearance has, however, had the effect of endearing him to most of the village, and in particular Oksana, who when he returns declares she does not need the shoes. And so they live happily ever after, presumably.

Below, you can find a 1913 adaptation, apparently made by Ladislas Starewitch (though the music is not original).