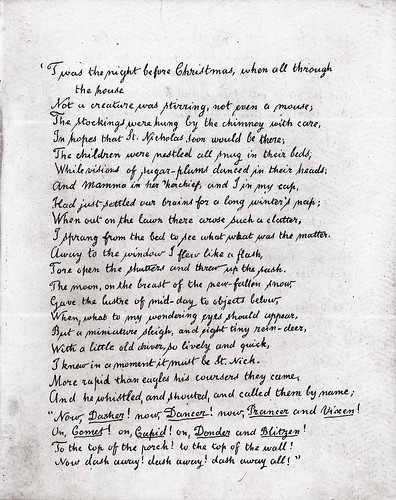 The poem was first published anonymously in on December 23,
1823; this manuscript belongs to the New York Historical Society.
Perhaps the most famous opening and closing lines in all of Christmas literature (and yes, I am including the Bible excerpt in that) come from an American poem by Clement Clarke Moore, written in 1823. Moore was a serious man with a serious reputation, and did not originally acknowledge the poem as his (it was not quite on par with his Bible studies and his Hebrew lexicon); but he seems to have changed his mind later.

I suspect, however, that these days most people, certainly this side of the pond, learn of the poem first through the parodies that reference it. It has a very simple rhyme scheme (rhyming couplets, if you are interested in the names of things) and the metre (anapaestic tetrametre, to be specific, which you also saw in the Grinch -- I wonder why) is more bouncy (even galloping?) and distinctive than the more pedestrian iambic pentameter of Shakespeare. There is a Lovecraftian parody (what is it with Lovecraft and Christmas?), a Batman one, a Star Trek one (actually, there are a lot of those), and so on. It goes on forever. And that is not even counting all the texts that only reference parts of the original poem. It is worth looking at where all those parodies come from: Ad Fontes!

'Twas the night before Christmas, when all thro' the house
Not a creature was stirring, not even a mouse;

It is actually quite interesting that the events of this poem happen on Christmas Eve rather than on Christmas Day -- after all, in the Anglo-American tradition, it is the latter which is the great day of gift-giving. It may seem like a detail of little import, but if you take into account the controversy over whether Christmas celebrations with gifts were disguised popery or worse, it may be seen as a way of trying to skirt the minefield. Christmas and Puritans have not always mixed well.

Clement Moore is probably influenced by Washington Irving, who could be said to have pretty much invented modern Christmas (with a little help after the fact from his friends and fans (like Dickens), primarily in Knickerbocker's History of New York, where a jolly, fat St. Nicholas is introduced, and in The Sketch-Book of Geoffrey Crayon Gent (where, in addition to meditations on Christmas, you also find "The Legend of Sleepy Hollow"). But I digress.

The stockings were hung by the chimney with care,
In hopes that St. Nicholas soon would be there;
The children were nestled all snug in their beds,
While visions of sugar plums danc'd in their heads,
And Mama in her 'kerchief, and I in my cap,
Had just settled our brains for a long winter's nap —
When out on the lawn there arose such a clatter,
I sprang from the bed to see what was the matter.

The stockings in front of the fire are, I think, a very old tradition, going back to the hagiography of St. Nicholas, though it is fairly impressive that it made it through the reformation and up to the 19th century (and now the 20th). Especially considering the potential fire hazard (though come to think of it, you would probably not light the fire if you expected gifts (or St. Nick) to come down the chimney -- that would seem cruel).

Away to the window I flew like a flash,
Tore open the shutters, and threw up the sash.
The moon on the breast of the new fallen snow,
Gave the luster of mid-day to objects below;
When, what to my wondering eyes should appear,
But a miniature sleigh, and eight tiny reindeer,
With a little old driver, so lively and quick,
I knew in a moment it must be St. Nick.

Moore, as far as I know, is the one that introduces the eight reindeer. It is worth noting, however, that the reindeer, the sleigh and St. Nick himself are all tiny. Miniature, in fact. If you have ever wondered how the much larger Santa Claus of current popular imagination made it down the chimney, this is how. There are advantages to a less imposing stature.

As I said, Moore (to the best of my knowledge) is the inventor of the now very commonly used names of the reindeer (though I think two of them have been altered to Donner and Blixen). Rudolph, you will notice, is missing (as he would only be invented in 1939).

As dry leaves that before the wild hurricane fly,
When they meet with an obstacle, mount to the sky;
So up to the house-top the coursers they flew,
With the sleigh full of toys — and St. Nicholas too:
And then in a twinkling, I heard on the roof
The prancing and pawing of each little hoof.
As I drew in my head, and was turning around,
Down the chimney St. Nicholas came with a bound:

Again, as far as I know, this is the first text which has the idea that Santa and his reindeer land on the roof with the sleigh; not to mention the fact that St. Nick himself jumps down the chimney. You can be fairly sure this was not something St. Nicholas would have done. Doing a spot of googling in order to check my hypothesis, I found the claim (on Wikipedia) that this song was the first, but that is clearly hogwash unless there is a space-time problem I am unaware of.

He was dress'd all in fur, from his head to his foot,
And his clothes were all tarnish'd with ashes and soot;
A bundle of toys was flung on his back,
And he look'd like a peddler just opening his pack:
His eyes — how they twinkled! His dimples: how merry,
His cheeks were like roses, his nose like a cherry;
His droll little mouth was drawn up like a bow,
And the beard of his chin was as white as the snow;

Please note that while a cursory reading might suggest the Santa Claus of current TV commercials, with cheeks like roses, a nose like a cherry and beard white a snow, with twinkly eyes and dimples, and to top it off, the bundle of toys on his back, that is not all there is here. First off, St. Nick is tiny (again, there is the reference to "the droll little mouth"), and he is also dressed all in fur, and covered in ashes and soot (though the latter should not be such an unexpected consequence of travelling my chimney). But he is still disturbingly ... jolly:

The stump of a pipe he held tight in his teeth,
And the smoke it encircled his head like a wreath.
He had a broad face, and a little round belly
That shook when he laugh'd, like a bowl full of jelly:
He was chubby and plump, a right jolly old elf,
And I laugh'd when I saw him in spite of myself;
A wink of his eye and a twist of his head
Soon gave me to know I had nothing to dread.

Moreover, he is efficient and not overly loquacious.

He spoke not a word, but went straight to his work,
And fill'd all the stockings; then turn'd with a jerk,
And laying his finger aside of his nose
And giving a nod, up the chimney he rose.
He sprung to his sleigh, to his team gave a whistle,
And away they all flew, like the down of a thistle:
But I heard him exclaim, ere he drove out of sight —
Happy Christmas to all, and to all a good night.

And there you have it: Probably the most famous ending in Christmas literature. It has already been parodied in at least two of the texts I've mentioned so far, and I'd be willing to bet it will pop up again. And when it does, you will know where it came from.
Tor likes this
Category
Literature
Tags
poetry
Christmas
Books
advent calendar
American Literature
Christmas stories
Views
6270