Christmas stories: Journey of the Magi 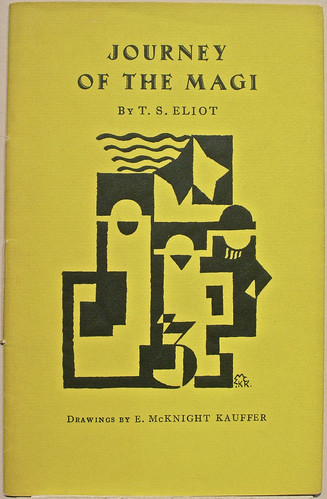 There have been some poems in this series of Christmas stories, but they have all been very Santa-oriented. When a colleague suggested I include T. S. Eliot's poem, "Journey of the Magi", I thought it might be a nice change. Also, we've had Luke; it's time Matthew got some attention, too. This is, you might say, a different take on the Christian birth story.

The poem was written in 1927, so it is an interwar poem (with all that might imply). You should also know that Eliot was a strong believer in the Literary Tradition (and himself as an important part of that literary tradition). His poems are therefore often very erudite, full of quotations and allusions. This one is not so bad, but it helps to know your Bible.

The three wise men (the actual number never actually specified, but we tend to have them portrayed as three because they brought three gifts) are going to Bethlehem to greet the new born child (although the poem never states outright the purpose of the journey -- it leaves you to figure it out for yourself, based on whatever references you can pick up on).

The original account is found in the Gospel of Matthew, chapter 2. Within the context of the Christian tradition, one would expect the experience of the Magi to be recounted as a transcendent, wonderful and pure experience of joy and awe. Matthew 2:10 says that “When they saw the star, they rejoiced with exceeding great joy”. And perhaps especially, you might expect that someone recounting this experience at the remove of many years would emphasise the wonder of having been part of that experience, and recount it in a tone appropriate to it: something formal and dignified.

But that is not what we get. The poem dwells on the hardships of the journey, all the wearying and unpleasant experiences. And the actual encounter is described as merely “satisfactory”. But I am getting ahead of myself. The poem begins with the journey.

’A cold coming we had of it,
Just the worst time of the year
For a journey, and such a long journey:
The ways deep and the weather sharp,
The very dead of winter.’

These first five lines are quoted (though subtly altered): They come from a sermon from 1622, by an English bishop called Lancelot Andrewes (back when people still called their children Lancelot). He wrote that

A cold coming they had of it at this time of the year, just
the worst time of the year to take a journey, and specially a
long journey. The ways deep, the weather sharp, the days short, the sun farthest off, in solsitio brumali, the very dead of winter.

I won't go too much into the mechanics of poetry, but I would like you to note how introducing line breaks and altering or removing some words change the way you read these words. The poem itself is of course written in free verse (which means it has no fixed metre or rhyme, lending itself well to the conversational impression of the poem: The speaker is being carried away with memories, musing on an altered world).

And the camels galled, sore-footed, refractory,
Lying down in the melting snow.
There were times we regretted
The summer palaces on slopes, the terraces,
And the silken girls bringing sherbet.
Then the camel men cursing and grumbling
And running away, and wanting their liquor and women,
And the night-fires going out, and the lack of shelters,
And the cities hostile and the towns unfriendly
And the villages dirty and charging high prices:
A hard time we had of it.
At the end we preferred to travel all night,
Sleeping in snatches,
With the voices singing in our ears, saying
That this was all folly.

The society encountered by the magi on their journey is not an idyllic one. The society left behind is a paradise of summer palaces and girls and sherbet (though it is unclear whether they are "regretted" because they were left behind or because they were somehow wrong; my money is on the first). The reality facing them is one of refractory camels, camel men cursing and grumbling and running away and wanting their liquor and women, hostile cities and unfriendly towns. (I cannot help seeing this in the interwar context, with its nostalgia for Edwardian England).

You will also notice that the first stanza is dominated by winter and night, both of which regularly function as images of death. This is made very clear, for example, in line five “the very dead of winter”. It could of course also refer to an unsustainable way of life. But if the first stanza is associated with winter and night, the second (which shows the arrival at the end of the journey) opens with a reference to the dawn. I feel like I am repeating myself rather a lot in this series, but this idea of death and rebirth really is a commonplace.

Then at dawn we came down to a temperate valley,
Wet, below the snow line, smelling of vegetation;
With a running stream and a water-mill beating the darkness,
And three trees on the low sky,
And an old white horse galloped away in the meadow.
Then we came to a tavern with vine-leaves over the lintel,
Six hands at an open door dicing for pieces of silver,
And feet kicking the empty wine-skins.
But there was no information, and so we continued
And arrived at evening, not a moment too soon
Finding the place; it was (you may say) satisfactory.

Here, it is no longer dead of winter, there is life: the smell of vegetation, running water, trees and a meadow. This suggests the beginning of a new era. As I said, there are a lot of Biblical allusions in this poem. The three trees, for example, allude to the crucifixion: Jesus, according to the Gospel of Matthew, was crucified together with two thieves, and you will sometimes find the cross referred to as a tree.

The white horse may be connected to Revelations 19:11: “And I saw heaven opened, and behold a white horse”. This book of the Bible is presented as a vision of the Second Coming of Christ. Moreover, wine is associated with both the wedding of Cana, where Jesus turned water into wine (according to the Bible), and with the last supper (drink this, for it is my blood). The six hands dicing for pieces of silver and feet kicking empty wine-skins combine the images of the Roman soldiers playing dice for Jesus’ robes at the foot of the cross and of course the 30 pieces of silver which Judas received for his betrayal. All of these are images which belong to the crucifixion, with the hint of the resurrection in the open door, which echoes the open tomb.

The magi, in the final two lines, arrive, at evening “not a moment too soon”. Though we are not told where they are arriving. Or why it is “satisfactory”. Sounds like the understatement of the century: According to the gospel account, as I said earlier, (Matthew 2:10) “When they saw the star, they rejoiced with exceeding great joy”. Satisfactory is rather less exuberant.

But satisfactory also has another meaning. In theology-speak it means something that atones for a sin. You could also use it for something that pays a debt. Which is of course what the death of Christ, according to Christian dogma, was all about: atoning for original sin. Which would then allow believers to take part in that resurrection beyond death.

All this was a long time ago, I remember,
And I would do it again, but set down
This set down
This: were we led all that way for
Birth or Death? There was a Birth, certainly,
We had evidence and no doubt. I had seen birth and death,
But had thought they were different; this Birth was
Hard and bitter agony for us, like Death, our death.
We returned to our places, these Kingdoms,
But no longer at ease here, in the old dispensation,
With an alien people clutching their gods.
I should be glad of another death.

Here, therefore, the images of death are combined with the promise of rebirth and resurrection. Note the capital letters: We are not simply talking about an ordinary birth or death. He has seen both of those before, he says. Rather, it is a Birth and Death, and it is not clear how the two are separate. This works on a number of levels. First of all, the classic Christian understanding that the Birth of Christ is significant because of the subsequent Death of Christ. Easter is, in the liturgical year, a much more important event than Christmas, precisely because it is the Death of Christ which has theological implications of Resurrection and Redemption for Man.

The speaker is a Magus, a Zoroastrian priest, rather than a king (which is rather interesting, if you will allow me a digression: The word is old Persian, but was apparently adopted into Latin, thereby making its way to us). There seems to be more implications to his words than the purely Christian: His society is dying, his religion, Zoroastrianism, will all but disappear (it still exists – I think there are around 200 000 Zoroastrians in the world).

Why would he be glad of another death? This is not a capitalised death. Perhaps he would like to die himself, to escape the world and a life he no longer knows, presumably in favour of Heaven?). It could be a desire for a second coming, which promises that Christ will rule a kingdom of the just on Earth, because the old Kingdoms and palaces no longer please (though I imagine that would be capitalised). I don't know. Perhaps he thinks society needs shaking up again (in an interwar context, that would certainly make sense).

And as a Christmas poem, it is interesting: It plays around with the common ideas of winter as death and the promise of spring and rebirth; but it does so in an unconventional way.