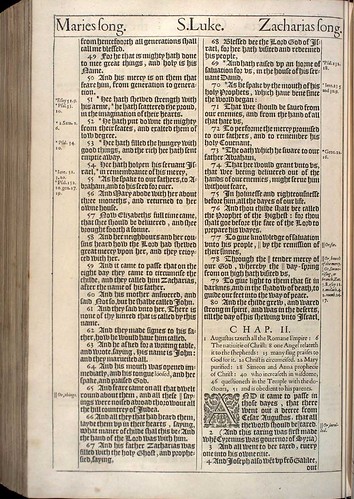 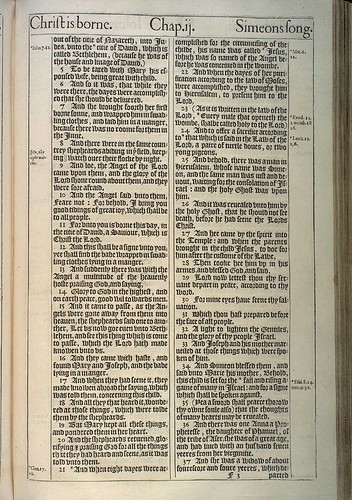 Luke 2 from The King James Version of the Bible (1611)
-- the third approved English translation, but
probably the most famous.
I guess it's called Christmas for a reason (the Christ and Mass parts of the word suggests something rather more overtly religious than the rather more archaic Yule). While to me, the holiday is very much a secular event, and I think of it as part of a long tradition of midwinter festivals that are there to promise that the sun is not actually going away forever (and we all need that reassurance on occasion), it would seem churlish to bypass the text that is most commonly associated with the origin of the current Western incarnation of the festival.

In Norwegian, it is called "Jule-evangeliet", the Christmas Gospel. I haven't come across an English name for it, except the book, chapter and verse: Luke 2:1-20. The Gospel of Luke is not the oldest; Mark, however, does not begin his account until the baptism, and is therefore useless for Christmas purposes. Matthew could be a candidate (he is the one with the story of the wise men and king Herod killing all the children), though; but perhaps someone felt that angels appearing to shepherds was more appropriate to the season than magicians from the East having divined it from the stars (there is also less murdering of babies in Luke, which helps set the tone of goodwill towards men).

St. Luke is the patron saint of students, butchers and physicians -- one account identifies him as a doctor who travelled with Paul, but in all probability that is spurious. The gospel was probably written around the turn of the first century, and used Mark as a main source (making it a synoptic gospel, because it sees the story in much the same way as Mark and Matthew), and also a source named Q, which was probably a collection of sayings that Mark did not have access to.

What you may be asking yourselves, just now, is, if this is the second chapter of Luke, then what is the first all about? After all, jumping in a chapter into the action does seem to get you straight to the point. Well, I am here to educate.

Chapter one opens with an introduction, in which the author addresses a certain Theophilos (I don't know whether that is a real name; it does seem a strange coincidence that he is named "god-lover" -- unless my meagre Greek fails me). It then goes on to tell of the miraculous conception of St. John the Baptist (who, the angel Gabriel promises, will not drink wine or liquor -- and who should be named John), and how, six months later, the same angel is sent to Mary to inform her that God had selected her, and that she should name the son Jesus (the angel seems very particular about names). John is born and in a single verse sent off to live in the desert for about 30 years. I could go on and on about the Jesus/John connection, because it is quite interesting, but I will leave that for another day.

On to the main event! The opening of chapter 2 is fairly famous:

1 And it came to pass in those days, that there went out a decree from Caesar Augustus that all the world should be taxed.
2 (And this taxing was first made when Cyrenius was governor of Syria.)

The newer editions (and the Norwegian) actually gives this as "all the world should be registered" or entered into a census. Possibly King James' scholars were rather more anxious to explicitly prove the ubiquity of taxation (though for "the whole world" read "the Roman Empire").

Now, as you will no doubt recall, we celebrated (well, marked) the bimillennium of Augustus' death just a few months ago. Augustus, in effect, is fairly famous. Cyrenius is less so (Quirinius in the old Norwegian translation, and I notice the New International Version of the Bible gives it as Quirinius, as does Wikipedia). Interestingly, though, Quirinius was not the governor of Syria until the year 6 A.D. (and in another temporal curiosity, Matthew places the birth during the reign of Herod the Great, who died in the year 4 B.C.).

At any rate, because of this census, Joseph leaves Nazareth for Bethlehem. It is important that the child be born there, because the Prophet Micah (5:1-2) had stated that this was where the future Messiah would be born. Likewise, both Luke and Matthew go out of their way to point out that Joseph is a descendant of David (which the Messiah should also be), and that Mary was a virgin or an unmarried girl (probably due to Isaiah 7:14).

Mary is "great with child" by now (which, I think, is one of my favourite ways of saying "pregnant"), and so gives birth.

6 And so it was, that, while they were there, the days were accomplished that she should be delivered.
7 And she brought forth her firstborn son, and wrapped him in swaddling clothes, and laid him in a manger; because there was no room for them in the inn.

It tells us something about Luke, perhaps, that while Matthew has the child surrounded by gold. incense and myrrh and greeted by kings when he is born, Luke has the child's first bed be a manger, and the first visitors be shepherds. Please note, though, that the presence of a manger does not necessarily indicate that the child was born in a stable -- houses have historically had room for animals indoors during the winter; moreover, the word "inn" is sometimes given as "guest quarter", which would then indicate that while there was no room for them in the good rooms upstairs, they had to stay in the lower rooms where the animals sometimes entered.

Back to the shepherds, however:

8 And there were in the same country shepherds abiding in the field, keeping watch over their flock by night.
9 And, lo, the angel of the Lord came upon them, and the glory of the Lord shone round about them: and they were sore afraid.
10 And the angel said unto them, Fear not: for, behold, I bring you good tidings of great joy, which shall be to all people.
11 For unto you is born this day in the city of David a Saviour, which is Christ the Lord.

It might be worth mentioning at this point that "Christ" (from which we get half the word Christmas) comes from the Greek Χριστός, which is basically a translation of "Messiah" -- it is a title, not a name.

The shepherds run off to see this "babe wrapped in swaddling clothes, lying in a manger", which the angels have directed them to; and when they do they tell those who are there what they have just seen.

16 And they came with haste, and found Mary, and Joseph, and the babe lying in a manger.
17 And when they had seen it, they made known abroad the saying which was told them concerning this child.
18 And all they that heard it wondered at those things which were told them by the shepherds.
19 But Mary kept all these things, and pondered them in her heart.
20 And the shepherds returned, glorifying and praising God for all the things that they had heard and seen, as it was told unto them.

And there ends this portion of the tale. Not being a believer, it is hard for me to avoid looking at this story and the way it has (retroactively) been placed at midwinter, without my folkloric glasses. Placing the birth of a saviour at the moment when the year is at its darkest makes perfect sense; and (significantly, I imagine) the fact that it coincides with a number of extant festivals is useful if you want a religion to spread. Much as Sir James Frazer may be a little out of date, his discussion of Mithraic religion is quite interesting, I think.

That said, you should read it -- in fact, you should read the whole Bible. It is frequently interesting, quite often well written, and generally useful for understanding Western literature.
Tor likes this