The letter arrived on the morning of the sixteenth. I was pushing a bit of breakfast into the Wooster face at the moment and, feeling fairly well-fortified with coffee and kippers, I decided to break the news to Jeeves without delay. As Shakespeare says, if you are going to do a thing, you might as well just pop right at it and get it over.

Thus begins this glorious Wodehousian Christmas story, with a daring plan and a touch of paraphrased wisdom. It was originally published in The Strand Magazine (generally more famous as the place where Sherlock Holmes was published) in December 1927 (incidentally also the year of the last Sherlock Holmes story). If you do not happen to have the December 1927 issue of The Strand on hand, you can also find the story in the collection Very Good, Jeeves (not to be confused with Right-ho, Jeeves; Carry on, Jeeves; My Man Jeeves or The Inimitable Jeeves). 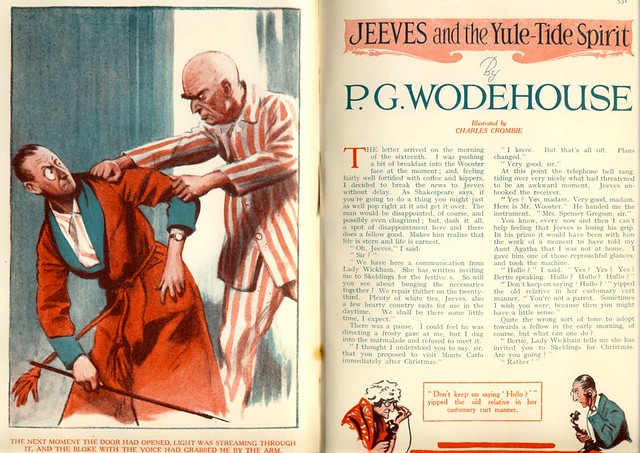 The opening pages of the original publication of the story. If you click on the image
it takes you to the blog where I found it -- Funcanny, a cornucopia of oddities.
Bertie Wooster's news is that rather than go to Monte Carlo for the holidays (something Jeeves has rather been looking forward to, in an understated way), they will be spending it with Lady Wickham at Skeldings. He is promptly punished by Jeeves (who fails to shield him from a telephone conversation with the dreaded Aunt Agatha) and by fate (Aunt Agatha informs him that Sir Roderick Glossop, father of his former fiancée, Honoria, will also be at Skeldings, and will he please try to show the man that he is not insane), but remains undeterred. Bertie has Plans: He will revenge himself on Tuppy Glossop for a prank played at the Drones (his club), and he will ask Miss Roberta Wickham to marry him. Jeeves has some doubts as to the advisability of the latter, prompting the following exchange:

So far the plans. If you know your P.G. Wodehouse, you will know Woosterian plans are made to be turned inside-out and upside-down, only to in the end be saved from ignominy by a swooping Jeevesian miracle. No less so here.

First, however, Miss Wickham offers Bertie a scheme for his revenge: to sneak into Tuppy's room at night and puncture his water-bottle with a needle tied to a stick. Which, on Christmas Eve, he prepares to do.

I mean to say, the one thing you can't do if you want to carry a job like this through with secrecy and dispatch is to stand at the end of a fellow's bed, jabbing the blankets at random with a darning-needle. Before proceeding to anything in the nature of definite steps, it is imperative that you locate the bot.

Which he does. And pokes a hole in it. Only to find that his victim is not Tuppy.

Tuppy has one of those high, squeaky voices that sound like the tenor of the village choir failing to hit a high note. This one was something in between the last Trump and a tiger calling for breakfast after being on a diet for a day or two. ... Among the qualities it lacked were kindliness, suavity and that sort of dove-like cooing note which makes a fellow feel he has found a friend.
I did not linger.

(You will immediately understand, of course, that if you do not read Wodehouse for his plots, you certainly read him for his phrasing.) The owner of the Voice is Sir Roderick Glossop, who informes Bertie that not only has he (Sir Roderick) and his nephew (Tuppy) exchanged rooms, but Jeeves knew about it, and that the two of them (Sir Roderick and Bertie) will be exchanging rooms for what remains of the night in view of the fact that Sir Roderick's bed is now drenched. Sir Roderick heads off, leaving Bertie to the contemplation of Jeeves' utter betrayal.

Jeeves, of course, has Reasons. He explains that what looks like disaster is in fact all for the best: His aim was simply to thwart Aunt Agatha's attempts to reconcile Sir Roderick to the idea of Bertie Wooster as a son-in-law (which would, in the way of things, inevitably have led to a renewal of the engagement with Honoria Glossop). This may sound confusing, but it may help if you only keep in mind that Bertie's natural state of being is fleeing from some engagement or other (sometimes towards yet another). It does make him worry, however, that in the light of day Sir Roderick will put the events of the night down to young blood and the Yule-tide spirit, leaving him still inclined to welcome a Wooster son-in-law. Jeeves can reassure him, however. After a fashion.

"No, sir. I fancy not. That might possibly have been Sir Roderick's mental reaction, had it not been for the second incident."
"The second incident?"
"During the night, sir, while Sir Roderick was occcupying your bed, somebody entered the room, pierced his hot-water bottle with some sharp instrument, and vanished in the darkness."

The culprit is of course Tuppy, who has received an identical idea from Miss Wickham. Bertie is aghast, and as Jeeves notes that this revelation does rather support his earlier doubts about the suitability of Miss Wickham as a matrimonial prospect, Bertie declares that

They forthwith resolve to escape Skeldings (and Sir Roderick's temper), and as they cannot go to London (where Aunt Agatha awaits), they head to Monte Carlo. Where, fortunately (fortuitously?), Jeeves has not yet cancelled the reservation.

A synopsis can of course never quite do justice to Wodehouse. His stories must be read. It is as much (or more) about the happy phrasing as the intrigue. And if you have any doubts that the phrasing is happy, I can inform you I giggled like mad repeatedly while writing this.

While you are looking for the book, you may enjoy the culmination of the matrimonial plot in this short sequence from the utterly magnificent ITV adaptation with Fry & Laurie as Jeeves & Wooster.