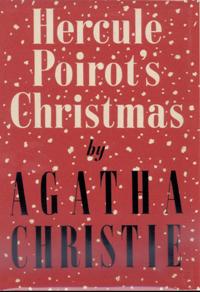 First edition cover.
When we were still bright-eyed, bushy-tailed high schoolers, Tor and some friends made a list of things you could learn from history. I seem to recall "Don't invade Russia" was top of the list, but "don't drive in an open top car if you have enemies" was one of them. I have since been thinking that this particular entry should be amended to "Don't drive in an open top car or invite Poirot to spend time with you if you have enemies". Of course, that does not protect you from other people inviting him and you at the same time or neighbours inviting him to stay, in which case (I am sorry to say), the end is inevitable. Probably best not to get enemies.

I have previously pointed out that while in Norway crime is the purview of Easter, English-speakers seem to be all in favour of a murderous (when not ghostly) Christmas. And there is one author it would be a crime to neglect. Agatha Christie wrote 66 detective novels and 14 collections of short stories, and it should be no surprise that there is not just one set at Christmas. I could think of two off the top of my head, and after consulting Jamie Bernthal, I was told that there is also a Miss Marple story called "A Christmas Tragedy" (I had actually read that, but not filed it under Christmas at all) as well as some religious children's stories (presumably sans murder).

Of the two that came to mind, one is the short story "The Adventure of the Christmas Pudding", which you should of course read; but today's text is a full blown Christmas murder novel. And not only that, it is a classic locked room mystery! And one, at that, with "a good violent murder with lots of blood", as Christie promises in the dedication (apparently her brother-in-law had complained her murders were becoming anaemic), and emphasised by the occasionally appended opening epigraph (quoting Lady Macbeth):

Yet who would have thought the old man to have had so much blood in him?

A pater familias with a sadistic streak and a past is foolish enough to invite his extended family for Christmas; and to make matters worse, he flashes uncut diamonds about and makes a lot of noise about planning to make a new will. Clearly the man has a death wish.

The murder itself happens on Christmas Eve. But before that we are given tantalising hints as the novel jumps from perspective to perspective in the lead-up to the event, showing their arrival (and their thoughts on that arrival) at the Hall -- because yes, this is a country house murder mystery. From Stephen Farr, for example:

For a moment he thought 'I wish I hadn't come...'
Then he remembered his purpose and his lips set back in a grim line. No, by hell, he'd go on with it! He'd planned this for years. He'd always meant to do -- what he was going to do. Yes, he'd get on with it!

Her heart beat a little bit faster. Would it be all right? Would she be able to accomplish what she had set out to do? Surely -- surely -- she had thought it all out so carefully... She was prepared for every eventuality. Oh, yes, she would succeed -- she must succeed...

And that is just in the first four pages. And within the second chapter, Pilar has declared that

'If I had an enemy -- if anyone hated me and I hated them -- then I would cut my enemy's throat like this...'
She made a graphic gesture.

Which is of course precisely how Mr Simeon Lee is murdered, upstairs, apparently while alone in a locked library while all the guests are elsewhere. And Pilar and Stephen are not the only suspects of course. All the guests are there more or less unwillingly, all have motive; and as is the custom with a locked room mystery, none seem to have had the opportunity. This is mainly so because the murderer had made such a lot of noise, causing people to arrive quickly at the scene.

It was then he first heard the noise from overhead: a crashing of china, the overthrowing of furniture, a series of cracks and bumps.
'Good gracious!' thought Tressilian. 'Whatever is the master doing? What is happening up there?'
And then, clear and high, came a scream -- a horrible high wailing scream that died away in a choke of gurgle.

They all run up to find out what is the matter, break down the locked door and find the man in a pool of blood (prompting the Macbeth reference). In fact, that is paraphrased and emphasised by Poirot when he arrives:

Because of course Poirot is lodging nearby (see?); in fact, he is just explaining to his companion why it is silly to think of Christmas as an unlikely season for crime, listing all the possible features of the holiday which may trigger other emotions than good will among men. Unsurprisingly, he is right.

I won't tell you who did it. I will tell you Agatha Christie is the queen of multiple threads of secrets to be unravelled. And Poirot is of course at least a minor god. It is a lovely book. I would say it is "classic" Agatha Christie, but there is a sense in which she appears to be writing with an uncommon archness -- in part there is the emphasis on the blood, in part it is Colonel Johnson's reaction to the news that there was no way out of the room:

Do you mean to tell me, Superintendent, that this is one of those damned cases you get in detective stories where a man is killed in a locked room by some apparent supernatural agency?'

A gentle self-parody, wrapped around a properly bloody murder inside a Christmas story. There you have it. Should be pefect over the holidays.
Tor, Karoline likes this