Camilla, 03.09.14 22:12
Mole, to me, is magical and somewhat mysterious. I had heard of it, but the first time I actually ate it was in a wonderful restaurant in Santa Cruz, called Chocolate, where all dishes were made with ... you guessed it.

I have tried it elsewhere since then, but nothing has ever quite lived up to that first moment of magic, in part because the mole in Santa Cruz was served with corn bread and a delicious salad with pumpkin seeds and coriander. I have hesitated to try making it myself because it requires so many ingredients and (supposedly) so much time. In the final analysis, the ingredients pose the main problem. Trondheim simply does not have a reliable, good selection of South-American ingredients (something I have struggled with when making carapulcra, as well). This is especially a problem when you get to chili peppers.

Mole requires a wide range. One recipe I encountered suggested the ancho, pasilla, mulato and chipotle. Another substituted the guajillo for pasilla and mulato. We were fortunate enough to find chipotle quite easily, but it took me ages to finally track down the ancho and the guajillo. Do not (do NOT) just buy "red chili". You want one (or four) that have a fairly strong flavour, but which will not burn your tongue off. 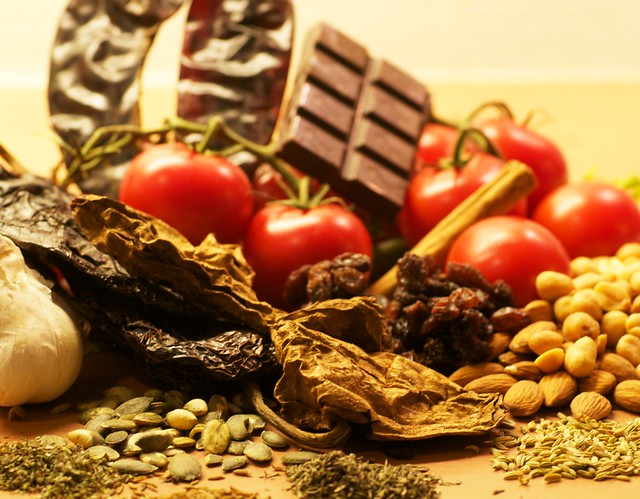 At any rate, I read up on moles and all the different recipes of the internet, and here is my (somewhat hodgepodge) attempt at the dish.

First, make chicken stock. So many of the recipes stressed that you should not use store bought stock, so I didn't dare.

1 chicken (take out the breast pieces for later, boil the rest until it is quite dead)
1 onion
1 carrot
1 stalk celery

Boil for an hour or two and set aside. The dried chilis (dry them if they are not already dry) should then be placed in water for about half an hour, complete with seeds. I used

The water will soak up a lot of the flavour of the chilis (some of which is in the seeds), so that from what I understand, this will allow you to retain that flavour without killing your friends with the seeds themselves. Point is: Whatever you do, do not throw out the water afterwards. It goes in the pot, eventually.

Once they are soaked, deseed the chilis and throw them in the blender with the water, blend and set aside.

Then the spices. They should be toasted, then ground. But since I do not have a spice grinder (and my shoulder would never let me live it down if I went at them in a mortar), I toasted them and then mixed them in with the nuts and almonds, and the raisins (see below). 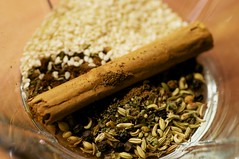 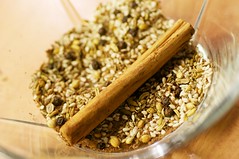 They should be toasted quickly in a dry skillet. No oil. Nowhere. Take care not to burn it. Let the whole spices toast longer than the ground.

Meanwhile, prepare the nuts and suchlike. 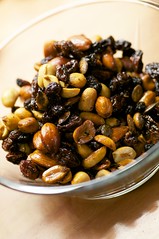 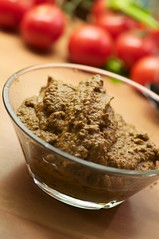 The raw nuts will need much longer in the pan than the raisins, so leave them for last, together with already roasted nuts/seeds. Blend, and you'll end up with what looks like the world's best peanut butter.

Onwards to the vegetables! You will need to roughly chop

You may also quickly fry a few slices of white bread (or maize tortillas) in the fat. That way you can soak up all the rest of the oil and make sure not a bit of taste escapes.

And then ... you blend!
I have no idea how mole was made before the invention of the blender. Or, well, I do. I just don't want to think about it, because the idea of doing all this with a mortar makes my whole body ache. 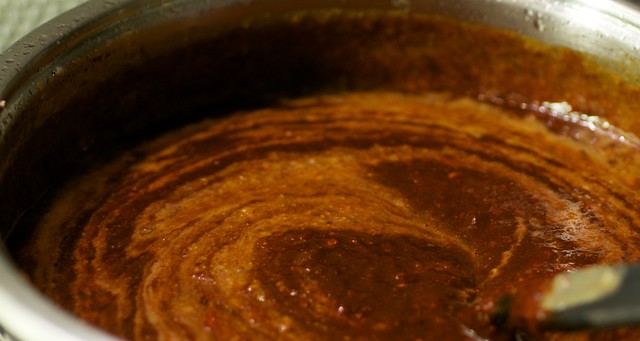 And then, finally, you put it all in a pot. And you add the magical ingredient, the one that you know you have been waiting for. 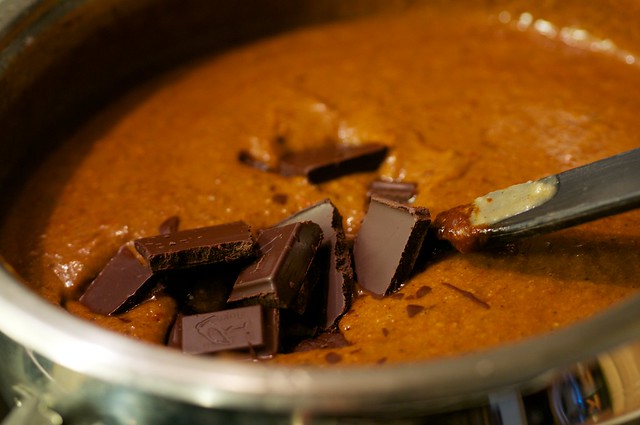 Let it simmer for a couple of hours while stirring regularly. Meanwhile, whip up some cornbread (with fresh maize, if possible) and a delicious salad (coriander and toasted pumpkin seeds are absolutely essential); and do not forget to prepare some chicken to go with the sauce. Or something else, if you prefer.

It is not true that making mole takes a whole day. I suspect it is true if you make it the old-fashioned way, without a blender, but while I do have a propensity to make things difficult by aiming for the "traditional", I am not quite that far gone. 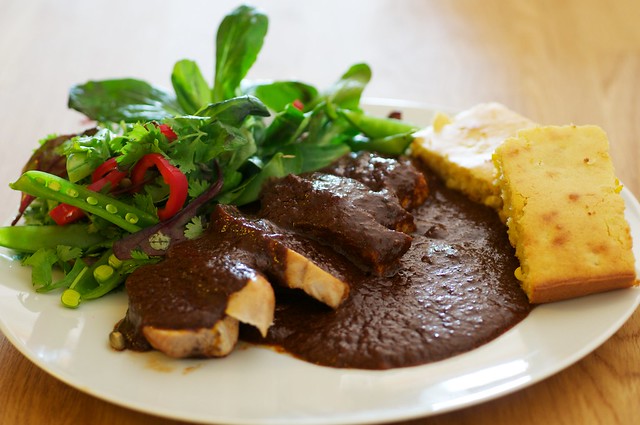 Are, Tor, Anja likes this

Tor,  04.09.14 17:58
The result was pretty good. And I'm quite impressed by the amount of stuff that went into this dish. Highly advanced cooking.

The bread needs some work, though. It tasted like cake, so we need to find a recipe with less sugar and more other stuff.
Camilla likes this